Thank You for today! The year 2016 on the Chinese calendar is a year of the Monkey, starting from today, February 8, and ending on January 27, 2017. Also known as Spring Festival, it marks the beginning of the year 4714 and is the longest and most important Asian celebration.

Today we celebrate the coronation of the Fire Monkey. She promises 2016 to be a time of adventure, discovery and luck! Donald Roller Wilson is the official painter in the palace of the Queen of 2016.

The energy of our Queen Fire Monkey is an incendiary mix of the hard metal element, the monkey belongs to, and fire which represents the sun. “Fire is dominant in the five elements. When fire is atop monkeys they will be swinging around, they will be difficult to predict. A lot of things will be unexpected,” said Chow, Hong Kong-based soothsayer.

A lot of things will be surprising!

The Monkey from The Handbook of Chinese Horoscopes by Theodora Lau:

“I am the seasoned traveler
Of the Labyrinth.

The genius of alacrity,
Wizard of the impossible. 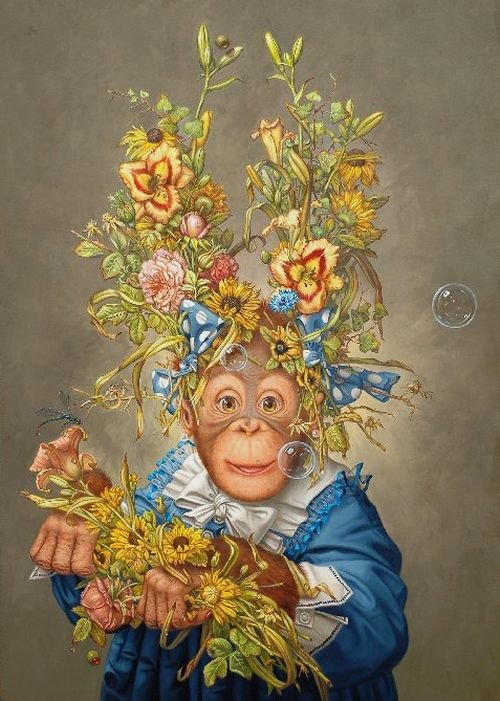 My brilliance is yet unmatched
In its originality.

My heart’s filled with potent magic
That could cast a hundred spells.

I am put together
For mine own pleasure.”

I am the Fire Monkey.

He who laughs and runs all day

My Crown made from three “C”

I present it to you.

Thank you for your smiles. I wish you to wear the crown of 2016 in Cleverness, Curiosity and Creativity!