Thank You for my happy Destiny. My way is beautiful. I was born in USSR but educated in Western tradition. This rich composition allows me analyzing two different world, I suppose.

On the photo below we see two women which are on the one stage together. The stage is the formal dinner in Schönbrunn Palace, Vienna, where Khrushchev and Kennedy appeared together for the only time and in the company of their wives Nina Khrushchev and Jackie Kennedy. 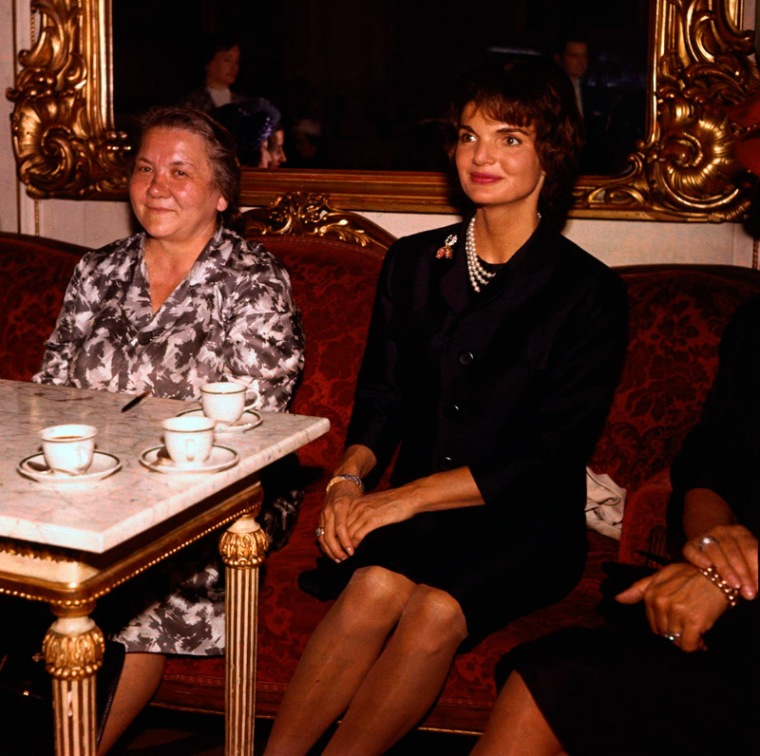 For Kennedy, who had become President in the same 1961 year, it was his first meeting with his great opposite number one from the Soviet Union.

“I never met a man like this,” Kennedy told Hugh Sidey, Time magazine’s White House correspondent. “[I] talked about how a nuclear exchange would kill 70 million people in 10 minutes, and he just looked at me as if to say, ‘So what?’”

At their final meeting, Kennedy sought to improve the chilled atmosphere over Berlin. “It is up to the U.S. to decide whether there will be war or peace,” Khrushchev said. “Then, Mr. Chairman,” Kennedy responded, “there will be war. It will be a cold winter.”

At the first glimpse we see the clear contrast between the looks of the First Ladies. Jackie is fashionable and sophisticated and Nina is provincial and shapeless. But mindful view understands that the visible differences in appearance of two ladies are just the tip of the iceberg.

Jackie is 32 y.o and Nina is 61 y.o. here. Jackie’s father, John, was a wealthy stockbroker on Wall Street whose family had come from France. Nina’s father was a poor peasant from the village in Ukraine. At the age of 22 y.o. Jackie enjoyed her youth in the George Washington University. Nina in her 22 y.o. was suffering by typhoid fever and lived in the village house even without floor just ground.

Jackie and Nina were a very strong women. They both were bitterly crying when their children were lost. Jackie’s third child Patrick died after two days from the birth. Nina had buried her daughter Elena.

They both loved their husbands and they both became a widows. Kennedy was killed and Jackie became a widow at age 34. Khrushchev died of a heart attack in a hospital near his home in Moscow on 1971. Nina was a little lucky because she was 71 y.o.

Jackie died of a form of cancer of the lymphatic system. She was 64 years old. Nina died at 84 y.o.

What the complicated Destinies we have just touched!

At the first glimpse we all are different. But see attentively: for every mother her child is value, every girls dream about Prince’s love, every boys dream to become an astronaut. Our tears are the same about loss and pain. Our joys are the same about happiness in our families and peace in our countries.

Thank you for sharing with me this peaceful moment.